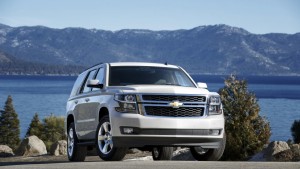 Emission standards have become quite tighter in recent years – similarly, gas prices have skyrocketed and auto manufacturers have redesigned vehicles to meet legal requirements while maintaining customer affordability. General Motors has taken care of all the research for you and has transformed their models into gas efficient vehicles so you will not have to worry about fuel efficiency. Luckily, their SUV models have also received some extra cabin space. Take the 2015 Chevy Tahoe and 2015 Chevy Silverado for example, designers have completely redesigned the roofline and tweaked exterior structures. However, the biggest changes can be found on the inside – the interior design has received several changes. The dashboard is equipped with an eight inch center screen and 12 device charging locations. The Chevy Tahoe has entered a new stage – a digitally inspired one. If you would like to read  the full article, please click below:

0 thoughts on “New 2015 Chevrolet Tahoe Has Plenty of Room”