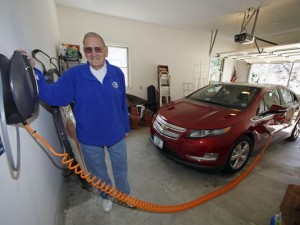 Chevrolet was pleasantly surprised after receiving results from a study conducted on Volt plug-in models in use in California. Evidence revealed that Chevy Volt owners were receiving more electric-driving range than previously expected. This study found that 15% of the vehicles were actually exceeding the vehicle’s labeled electric driving only range – this means that instead of 35 miles per charge, they are getting at least 40 miles. Pam Fletcher, Volt Executive Chief Engineer, said, “The fact that most of the folks who purchased the Volt at launch are still enjoying EV range performance on target with when they took delivery is testament to the attention to detail our team paid to delivering on our promise of most people driving all electrically most of the time.” Since its debut in 2010, Volt owners have combined a total mile range of over half-billion miles. If you would like to read the full article, please click on the link below: